From DQWiki
Revision as of 04:50, 3 March 2014 by Velcanthus (talk | contribs) (→‎Notes of Interest: Removed Jus since this was extorted from her on pain of pain.)
(diff) ← Older revision | Latest revision (diff) | Newer revision → (diff)
Jump to: navigation, search 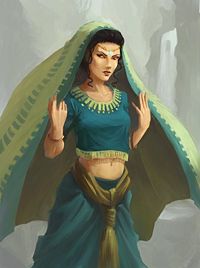 Winter 800 WK. Found drunk under a table three weeks after a guild meeting and sent out with party on a late contract. Joined guild when she returned because she had nothing better to do.

She is six foot two, one hundred eighty pounds with silvery hair and pale skin (PB 17). Light olive complexion with green eyes and silver hair cropped short, solid frame plain features, reeks of alcohol. When not in armour (bone plate), wears tight leather clothing and can be found in the nearest pub

A lush, she is the second child of fraternal twin girls born to Alfheim gentry. Father Na'than'a'el, mother Ehlera, sister Cheri and baby bother Throne. The Angelus family, of which Na'than'a'el is the oldest son, own land in Fergensee Provance and control even more as senishals for titled land owners who spend most of their time in Eiderlon.

Constantly in her twin sister Cheri's shadow Serra a lonely and troubled child spent most of her childhood avoiding people prefuring the company of animals and nature. Known for violent outbursts and fits of distemper she eventually found escape and a peace of sorts in alcohol and began socialising with the common workers and non-elves. Her relationship with her twin deteriated as Cheri began to attract suitors and use her influance to make Serras life misiable. Serra crawled further into the bottle seeking renown and acceptance from her peers in increasingly more self-destructive acts of mischeif, debauchery and destruction of private property.

Dispairing of her wild ways and incresingly violent clashes with her more favoured sister, Serra was sent by her father to The University in the Provance of Erlangene. Here Serra learnt the general Earth College and Healer skills despite spending most of her time carousing. Becoming boared and dis-satisfied with the "stodgy' elven approuch to magic Serra was asked not to return after completing the basic courses.

Returning home in disgrace her drinking increased and her clashes with her sister and family increased until she was thrown out and disowned for her drunken debauchery, fornicating with non-elves and the attempted murder of her twin sister(PB 27). Serra in a fit of sober rage after being forcfully clensed during a arguement tried to cut off and mutalate Cheri's face with a broken bottle.

Effectivly exhiled from Fergensee due to her families influance she drifted first to Eiderlon and then south to Bergelfen exsisting mostly as a social parasite. Attending a series of parties thrown by some neice of the crown and her friends in a bergelfen hotel Serra's next coherant memory is waking a week under a table in the guild pub.

Serra was born in the Winter of 600 WK. Serra gave birth on the 24th of Ice 809 to twin girls, Dolor In hostium Angelus and Vae Victus Angelus.

Aside from knowing an inordinate amount of bawdy drinking songs and suffering extraordinary bad luck in fights she can eat almost anything (including raw wood, grass and guild rations).

Has an amazing talent to backfire spells.

Known to carry a portable still at all times in order to keep an ongoing supply raw alcohol for medicinal purposes. (Alcohol soothes her violent tendancies - A sober Serra is a threat to the party). Serra is known to be prone to violent rages or servere depression when sober.

Gets high off chocolate and can rotate her torso 180% in either direction without moving her hips.

Literate in Elven and common with some silent tongue and drow.

A distiller of spirits, a dabbler in husbandry, specialising in pedigree breeding.

A Journeyman ranger, herbalist and healer.

Hates any females (especially humans) who are prettier than her, has a list.

Dislikes spiders, revenant vampires and the avatars of dead gods

Winter 805 The Mystery of the Vanishing Lodge GM Bernard Hoggins