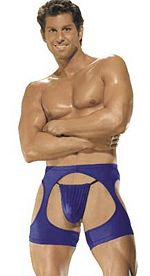 Quote: "Vapour is an excellent Air Mage. He is the prettiest of the three male air mages and so it comes as no surprise that the female Air mages have voted him man of the year for two years running. Not only kind and well spoken he is also handsome, tall and dashing, all part of the Vapour style."

Some may have their doubts, but rest assured it is all true - just ask Vapour, he'll tell you himself.

He is played by Neil Davies.

My god, he's gorgeous. Ok, actually he's not. Great body - if you like the over-pumped gym-boy kind of look - but other than that pretty normal on the looks department.

When relaxing, Vapour tends to wear clothes in the "minimalist" style. The choice of clothes chosen for the picture here is a good example of what he would consider Dressing Up, rather than Dressing Down.

When on guild business, Vapour is often seen sporting his new red-wrym skin armour, which he is very pleased with. This armour is body hugging to such a degree that it shows off and accentuates his muscle tone even more than normal. If prepared for battle, he may reluctantly move to his purple Leather of Air Mastery. Not nearly so good looking, but pretty impressive nevertheless.

The guild thought Vapour a "perfect candiate" to the Air College due to personality rather than magical ability or ambition. As such, he currently has very limited magical knowledge, with 'a few ranks in a few spells'.

Note: Most of following background information is not publicly known

Vapour (not his birth name) was born 7th of 7 to the Seen family in Seacroft-on-Sea. His home town was not a prosperous place, and Vapour was introduced by his 2 older brothers to the local tradition of "opportunistic weath procurement". At the age of 16, Vapour and his brothers met a resident of Seacroft in their local tavern who boasted of feats of daring, incredible wealth and the adoration of all from his days of "Adventuring in Seagate". The 3 brothers were soon visiting Seacroft to further investigate the investment opportunities.

As per normal, his brothers sent the youngest in to do the dirty work. Vapour was taking far too long though, and after hearing a large crash from within the building, his brothers decided to cut their losses and leave. **

The town guard arrived some time later, and Vapour was next seen being dragged off naked to the lock-up.

The owner accused him of stealing a massive fortune of gold and jewels over the last months - thousands of silver pennies worth!! (Totally outrageous! No one has that kind of money! And the man was obviously lying, since there was nothing of real value in the house!) Unfortunately, the charges were high and the proposed penalties severe. With a bit of luck in using whatever skills he did have, Vapour managed to escape before suffering the permanent penalties. He returned home only to find himself looking for help, only to be shut out by a petrified family who had already been visited by officials.

The following months were spent on the run, and he headed south to find the fabled Seagate Adventurers. Perhaps he too could receive the adoration of ALL!

After finding that he had the bare minimum magical entry requirements, the standard guild was unanimous in their decision that the Air College was the perfect place for someone with his personality.

**What they say happened: The story of the Seen boy's capture was a favourite amongst the town guard for many months. According to the Guards, Vapour was found trapped under two full-length mirrors, dressed in no much more than a rusty helmet and with an even rustier two-handed sword in his hand. The two mirrors were facing each other, and speculation is that Vapour was swinging the sword around while trying to watch both mirrors as once, tripped, and cause the whole lot to collapse on him.