This is awarded to a member of the Seagate Guild of Adventurers who single handedly saves the rest of their party from certain irresurectable death. Any Guild member can make a nomination to the Guild Council. If the Council considers the award justified, then a confirmation vote is put to all members the next Guild Meeting. If confirmed, then the actual Star of Alusia is transferred from the previous recipient to the latest holder.

prior to Clementine this info from SGT 11, can we confirm or deny?

Real world procedure Only a GM can nominates the character concerned. The GM explains to the Gods Meeting (acting as the Guild Council) how said person indeed saved the rest of the party from certain irresurectable death single handedly (or not). If the Gods approve the nomination, then the full Guild Meeting votes yea or nay.

I currently have the MS Word document and special A4 paper that the 'Star of Alusia' award is printed on. Please contact me (Jono), if for some reason I fail to update or pass on the printed copy to the current holder of the award. --Jono 14:34, 10 Mar 2008 (NZDT) 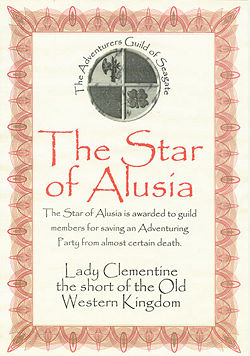