Clarissa D'Ornay is an Elven Air Mage, socialite, and lady of leisure. She enjoys the postion of concubine in the celebrated court of Prince Kadakithis of Sanctuary, entrusted with the comfort and safety his most honoured guests and the training of crack squad of dancing girls. 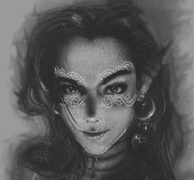 Clarissa is fine featured and strikingly tattooed young elf, along the most attractive of Guild members. Her eyes are framed by simple twisting briar thorns and inverted tear-drops, while the rest of body is decorated with complex images of fables of tragic love and revenge. The scenes, framed by leafy vines and incidental forest creatures, completely cover her torso and upper limbs while the trailing tendrils of plants reach to her wrists, ankles and throat. The tattoos are of an extremely fine quality and realism, incorporating an unique ink that has bleached parts of her skin creating a eery depth to the images.

Observers have been known to claim that they to change and move, but this probably due Clarissa's graceful poise, superb muscle contol, and extensive training. In fact, it is rarely mentioned that she is rather short for an Elf at 5'8" and built quite compactly at that. Fortunately, her skill in selecting garments means that she may make very good use of the assets she has.

Where she may be found

In Sanctuary, she may be discovered in plush seraglios of the Governor's Palace or behind the high walls of Foreign Quarter.
In Ranke she will be attending the Duchess Meredithis as an advisor, guard, and messenger between her and her kind uncle.
In Seagate she can be found handling reparations for her patron at the Seagate Guild of Adventurers or looking opportunities escape the pampered life of the court on adventure, when she is sick of the taste of antidotes.

When Clarissa joined the Guild in 796WK she was a very shy and secretive new Air Mage, given to wearing enveloping hooded cloaks and making few references to her past or origins.

It has since emerged that she had only recently found herself without clear memories of her past on the fringes of the Sea of Grass and only reached the relative civilisation of the Five Sisters with the leery assistance of Plains Barbarians, who suspected she was prophetic in some fashion and preferred to have that sort of threat left to already-cursed cities.

She then spent several years learning Common and piecing together fragments of memory, while eking out a living dancing in seedy establishments. She endured a number of hardships during this time and created the persona and identity she has today to survive. It was not long before she heard of the Guild and set herself to reach it, and it's promise of personal might and powerful allies.

She quickly formed a relationship with Dramus who, for reasons she is still unsure about, took her under his wing and entrusted her with a the role of raising his adopted human daughter, Firenya.

During this time, she was also pursuing the study of darker arts of persuasion with another noted local scholar and, on occasion, disappeared into the seedier parts of Old Seagate for weeks at a time.

Despite these faults she was a doting governess and very committed to ensuring Firenya's education and manners were given equal time to magical training. She also made sure to impart certain truths about "the way the world works" and took pains to instil a sense of confidence and independence in her charge.

In the Winter of 801WK she lead a party into Sanctuary, and due to a unforeseen complication, they were set upon and a number, including herself, were captured and brought before Prince Kadakithis. She offered herself to him, along with a commitment to defuse any retributive rescue missions, in exchange for the freedom of her fellows and some insight into how his city ran. However, she was spirited away before the deal could be successfully concluded.

Later in the Spring of the same year she participated on an adventure which precipitated several unpleasant experiences and lead to her breaking with her acquaintance with Dramus.

After several more successful outings she returned to Sanctuary in Winter of WK805 and managed to secure a coveted position in the Governor's court on the strength of her beauty and talents.

She has found success there and in particular recognition for her tireless work for Sanctuary Trade delegation with Senator's of the Lunar Empire throughout Winter 806WK, Clarissa has been assigned several odious and taxing responsibilities by the Governor's Palace.

A GM Information sheet is available on a separate sheet for ease of Printing.

A list of Clarissa's major Items is also available.

For joining adventures there is Clarissa Signup.