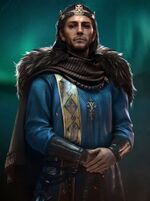 Blackthorn is an arabic dark mage from the Gatar Depression. He was the captain of the Aladarian secret police and is currently still wanted as a war criminal due to his actions in the recent Western Kingdom War. His whereabouts are unknown and he was last seen 250,000 years in the past on the plane of Purple, where he chose not to return to his own time, but instead just return to the Alusia of that time, his last words were "This will give me a bit of time to get even."

He is known for scowling, sulking and getting even.

He is rumored to to own more crystals of vision than anyone in Western Alusia.
Blackthorn is played by Dan Dixon.